If you haven't done a Disney race, you should definitely add one to your bucket list!
Posted by FashionablyFit on Thursday, May 25, 2017 3 comments:

So naturally, I started getting really aggravated when I synced my run & it didn't automatically apply. And then I saw the time difference...


However, the great people at Nike+ recommended I contact the info email address & explain the problem. I did, they of course put me at ease explaining they could fixed everything.
Naturally, I have a dark cloud that looms over my head & my run still didn't appear. So today, I re-ran the 10K.

This was my first 10K...I'm super proud to have finally done something other than a 5K....even though this was only a virtual 10K. And hey, I ran it twice!

Prior to the race, the organizers sent out a "challenge" email associated with the race. Challenging me & others in my area / region, to run the race in the shape of the letter "R". I opted to not partake in the challenge for a few reasons: 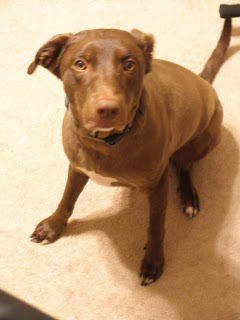 The race route entertainment was superb.... 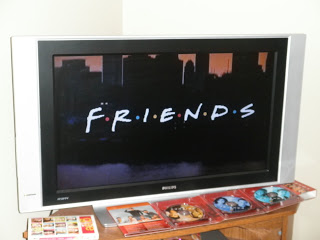 I didn't get anxious over the issue of "will there be port-o-lets or not??"...because I had one right down the hall... 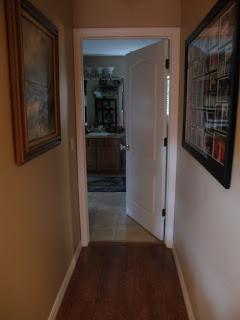 And I even got some well wishes from Mr. Bass on my way out of the potty... 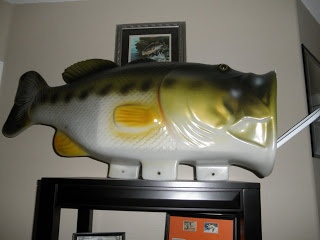 :) Matt had the decorating decision when it came to the guest bath...
so it's all "bass fishing" themed. Mr. Bass here keeps our TP safe
I ran this race without receiving a finisher's medal. That right there is a big deal folks.


Yesterday my time was 54:29, today my time was exactly 1 hour. Can I just take the average please?  I really wanted to be under 1 hour.
Either way, it apparently wasn't fast enough for Dexter... 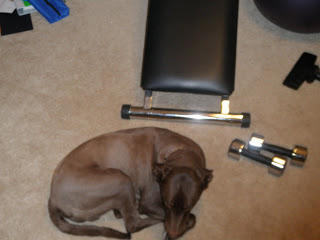 I get my best sleep during movies, he gets his best sleep next to the treadmill
﻿Post race, I indulged in a bowl of cheerios with honey drizzled on top; while the chicas that did this race in LA got to enjoy a Michael Posner concert!
Posted by FashionablyFit on Friday, April 29, 2011 2 comments:

Does anyone else have issues with their ipod?
I just synced my run for today....4.56 miles & went to review my mileage for the month. It only logged today's run for this week.

It could be operator error...but honestly, it's the same routine after every run.

Yes I have until 4pm on April 28th to sync it...but I only have a small window of time where I'm able to run.

Is anyone else planning to run this event?

Speaking of - my shirt arrived... Cute!!!
And if you're in the market for new running tops - these Nike tops are great. Super comfortable & great fabric.

I'm off to entertain Dexter until Matteo arrives home from work.
I have a weird hankering for sweet potato - - - dinner is planned!

Do you ever get weird cravings after a workout?
I always crave milk after a long run.
Posted by FashionablyFit on Tuesday, April 26, 2011 2 comments:

I'm in racing mode ~ like hard core. And by "hard core" I don't mean pumping out the miles left & right. What I'm talking about is the medals, the shirts, and the adrenaline that comes with the race...clearly not the miles associated with each one!

This weekend we have a family race....

The ESPN Weekend is this weekend in Orlando & Dick's Sporting Goods hosts the "Champion 5K". Dad & I ran it last year, and this year he thought it would be even more fun to have my husband, my mom, & my brother do it with us.
I'm not planning for an amazing chip time by any means...5K's require fast runners & well, I'm not fast. I've decided as long as I beat last years time, that's fine with me.
After a super thrilling conversation yesterday about half & full marathons, I've decided to sign up for my very first half marathon! Holler! And to reward myself, I'm purchasing my first running skirt. I've been totally obsessed with them lately. Of course MB (my hubby) thinks that I'm being hopeful by calling them a "running skirt", since he refers to them as "tennis skirts". Potato, po-tah-toe. I just feel the need to bring fashion to the races!
Another race on my radar is the Everest Challenge, hosted by Disney. (Disney medals are Ah-mah-zing BTW!). It's a 5K (bleh), obstacle course, & scavenger hunt. MB is totally game to do it ~ he's a sucker for a competition & I'm a sucker for a medal. We're the perfect match :)
Posted by FashionablyFit on Monday, February 28, 2011 No comments: