Today is my brother's 24th birthday.

If you had told my mom 24 years ago that he would live to see this day, she would have probably not believed you.

Ralphie was born 3 months prematurely. My mom's water broke at 4 months, & in hopes of delaying labor, the doctors put her on bed rest until the 6th month of pregnancy. (After suggesting to her that she go ahead & terminate the pregnancy). It was that 6th month that Ralphie was delivered.

Due to his being premature, his lungs were not fully developed, so he was put in a high frequency ventillator. that breathed 900 breaths per minute into his little body. At the time, the ventillator was still only a "trial" method - there were only 7 in the nation, 1 of which happened to be at the hospital that my mom delivered. The doctors forewarned my parents that 13 babies had been in this machine, Ralphie would be the 14th & that the 13th baby had died. 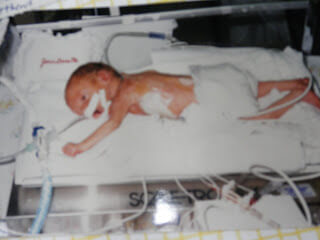 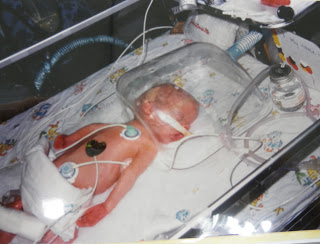 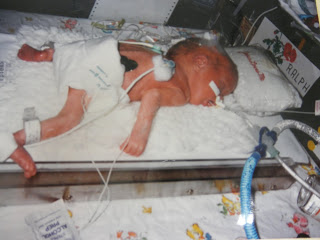 Ralphie survived the ventillator, but not without my parents getting several calls on seperate occasions during the middle of night from the doctors, telling them to "come down to the hospital & say goodbye", that Ralphie had taken a turn for the worst. 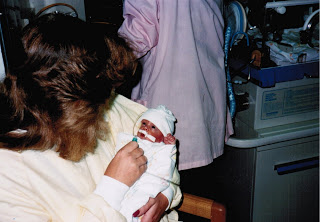 After being on the ventillator for 7 days, Ralphie was moved to an incubator that breathed 90% per oxygen into him. It was made known to our parents prior to - all the complications that could arise. It caused a bleed in Ralphie's brain, which ultimately led to him having cerebral palsy. Ralphie underwent 14 head surgeries by the time he was 12.


He has a shunt on the left side of his head, that controls the cerebral fluid. When barometric pressures drop, Ralphie normally experiences severe headaches. They aren't as debilitating to him now as they were when he was younger. 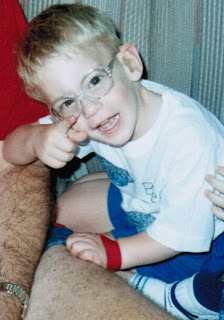 Ralphie's 80% deaf without his hearing aids in & he's 20% deaf with them. He is fluent in sign language & at first, opted to teach me only the words that make him laugh, like 'fart'. He has since changed his mindset after realizing that I'd only finger spell words to him since I didn't know the signs.

Ralphie is able to walk, he's not confined to a wheelchair. He has orthotics on his legs, which aid in stabilizing him enough to walk. His calf muscles are under developed - he's the epitome of "bird legs". His upper body however, definitely makes up for it. His right arm is freakishly strong & he will arm wrestle you til the world's end. His left arm is severely effected by the cerebral palsy, so he has no function in it, except to latch on to your hair & not let go!

Ralphie may not be "normal" in society's eyes...but let's be honest - what is "normal"? Ralphie's outlook on life & his love for people is admirable. He sees nothing but a person to love in everyone. He will talk your ear off & ask you a ridiculous amount of questions, to find out everything he can about you. And when he sees you again - 6 years later - he will remember EVERYTHING & repeat it all back to you. (The good and the bad).

He loves to dance & has been known to get his groove on doing the sprinkler.


His best friend is his service dog, Gracie. 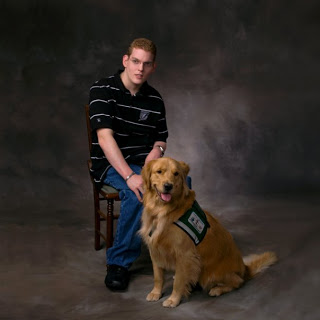 He is a walking almanac when it comes to sports. It's ridiculous how much he knows about stats, players, and their personal lives. 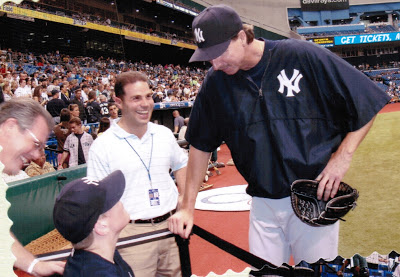 So in this picture, Ralphie is telling Randy Johnson that he should have been a basketball player because he's so tall. (Um, Ralphie I think he did just fine with baseball.)
Notice my dad (behind Ralphie) & Jason, the PR guy by Randy, are laughing.
Randy is not.
I'm totally blessed that I married a man who has the patience for Ralphie. ﻿
﻿

There was no doubt in Matt & I's minds that Ralphie would be in our wedding.


A gratuitous amount of pictures - an "over the years" montage if you will......

﻿
﻿ Given that Ralphie will always be dependent on my parents - it's really great to see that it doesn't effect his disposition. He's able to look at the positive side of things in his mind. He works with my dad & I. He "runs" with my dad (my dad runs, Ralphie rides his 3 wheel bike - but he calls it running). If there's something he wants to do, he does it. He's never let his cerebral palsy limit his desire to live.