Yesterday was a day from you know where. I was utterly stressed out & I hate that feeling. My shoulders & neck were achey, I was in a horrible mood, and I really just wanted to go to bed since it was raining.

Besides shopping, my other 2 "mood lifters" are working out & crafting. So I did both. (As opposed to digging a hole & putting my head in it.)


I am hosting a baby shower for my sis-in-law, so I started working on my infamous clothespins. 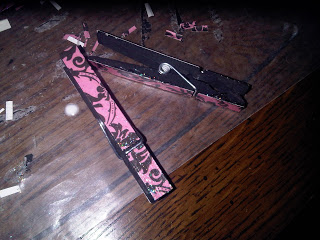 Those are one variation of the clothespins that I did for a lingerie shower. The ones I'm working on now will not be pink, since she's having a boy.
While I let the paint dry I popped in Jillian Michaels' Yoga Meltdown dvd. It was seriously, just what I needed. My back was too tense to run & I thought I'd punch the tv if I put in a P90X dvd. (I think Yoga Meltdown may still be available on Fios OnDemand.) 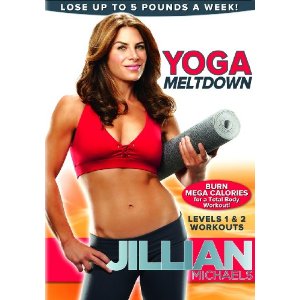 Yoga Meltdown has 2 levels ~ & I find them both challenging. Yesterday I did level 2. It's not your typical "yoga" class. I've mentioned before in previous posts how fast paced it is. Jillian does not "build" on moves as you would in a sanctioned yoga class. Rather she takes you through a series of "power poses", incorporates repetition, and then has you hold on the last rep for 15 seconds. It's like yoga at a cardio pace. 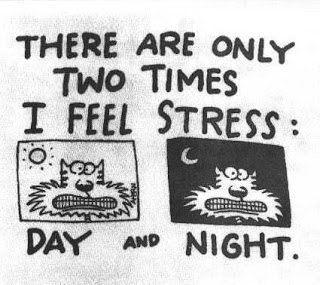 By the end of it, I felt like me again.
Which leads me to: what do you do to "de-stress"?
When your body is put under "stress", it releases cortisol. Cortisol is an important hormone that regulates blood pressure, insulin release, glucose metabolism, & inflammatory response (to name a few). 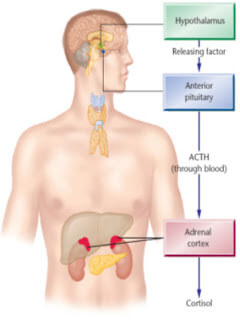 Some positive effects of cortisol are: quick bursts of energy (think of 'flight or fight'), lower sensitivity to pain, & heightened memory function.
Our bodies have what's called a "relaxation response" where our bodies move from physiological arousal to physiological relaxation ~ once the perceived stress has passed. However this predominantly applies to acute stress. During chronic stress this is far more difficult & often takes the outside help of yoga, stress management techniques, or breathing exercises. This is why it's so important to "de-stress".
As with anything else, too much cortisol can be a very bad thing. (Except shoes....I mean really, can you ever have too many shoes?)
Keeping high levels of cortisol in the bloodstream causes negative effects like: supressed thyroid function, higher blood pressure, blood sugar imbalance, & increased abdominal fat. The increase in abdominal fat could be linked to the fact that cortisol makes your body crave carbohydrates & want to eat more. Plus abdominal fat is the worst fat to have - - -> Abdominal, or visceral, fat is of particular concern because it’s a key player in a variety of health problems — much more so than subcutaneous fat, the kind you can grasp with your hand. Visceral fat, on the other hand, lies out of reach, deep within the abdominal cavity, where it pads the spaces between our abdominal organs. Visceral fat has been linked to metabolic disturbances and increased risk for cardiovascular disease and type 2 diabetes. In women, it is also associated with breast cancer and the need for gallbladder surgery. (Harvard Health Publications)
(Abdominal fat is clearly a post all in itself ~ and don't you worry, I'll save that super interesting post for a later date!) :)

This is why, when you're on a new fitness regimen or healthy eating plan, it's so important to not stress if you have a day that you forget to exercise or splurge & don't follow your diet. It's not worth stressing over. Just kick it in gear the next day & by all means don't count is a failure if you eat a cookie! 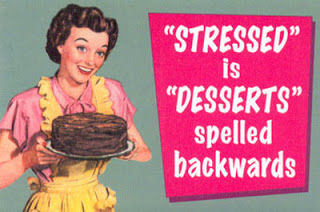 Every person is different ~ even down to how much cortisol their bodies secrete. Stress (cortisol, specifically) could be what's keeping you from your health & fitness goals. (Especially if it's causing you to eat cakes like THAT every day!)
Posted by FashionablyFit on Thursday, March 31, 2011 3 comments: