mickey's not so scary halloween party 2017

I did it! I was able to convince my husband that we should totally take the boys to Mickey's Not So Scary Halloween Party (MNSSHP)!!! We attended the party on October 5th (a Thursday evening) - and we had so much fun!

Here's a recap coupled with tips & some other pertinent information...

The party started at 7pm, we arrived to the park literally right as it was starting. This was not our original plan, but because of naps & some rain delays, this is how things ended up for us. We had our fingers & toes crossed that the rain would hold off...the forecast looked terrible! It stopped raining around 6:15pm...and did not rain again the rest of the evening!

Upon entering the park, you are greeted by cast members, in their Halloween attire, holding wrist bands. They put them on your right wrist, and you must keep them on the entire night. They are not a nuissance - I never noticed mine....and neither did the boys.

That wrist band is the party identifier, you must be wearing it to gain access all over the park. Our first stop was to get a map and figure out times of shows, character stops, and trick or treat spots. I went into this knowing there would be a lot to see & do, but I really underestimated HOW MUCH there would be. I thought that we would have plenty of time.

I had an idea for autographed tote bags, and luckily a talented friend was able to execute them! Since characters would be out for meet & greets, that are not normally around the parks, I thought this would be perfect for my boys to get some awesome new signatures. Due to lines, and time constraints, we saw a total of THREE characters, and only obtained ONE signature. This is the biggest regret I have, not prioritizing the characters. We prioritized the show, which was the Hocus Pocus Spectacular with all the villains - - I mean, how could you NOT? Sanderson sisters!? Hello. So we had a great spot in front of the castle to watch this. The boys did great through it....no one cried :)

We then bolted to get the boys more candy from the various trick or treat stops. The trick or treat stops was probably the main thing they had an interest in. The shows they didn't really care about, and they definitely did not like the fireworks. (I on the other hand, thoroughly enjoyed them!) I will say, the fact that Disney provided an alternative to the candy being distributed, for kids like mine with food allergies, in clearly identifiable trick or treat bags, was awesome! (I did go ahead & give verbal reminders to cast members distributing the candy throughout the park, because while Beau's bag was teal....it wasn't painfully obvious once dark set in). I was the designated stroller pusher (we brought the double stroller to accommodate a tired 5 year old) and I also would stand in line to wait for characters while the boys would hit the local trick or treat spots. I did exit 2 different lines because of the time constraints with wanting to watch a show or the parade.

Here's what we did...
1. We got trick or treat bags upon entering the park by Main Street
2. We caught the 1st showing of the Hocus Pocus Villian Spectacular - it was awesome! My inner child was over the moon.
3. Did some more trick or treating on the way to Tomorrowland. Once in Tomorrowland, because wait times for rides were non-existant, I stood in the line to meet Lotso with the boys while Matt & Hannah (my sister in law), rode Space Mountain. Matt & Hannah got done in time to join us....which clearly shows: 1. ride lines were SHORT 2. character lines were LONG.
4. We started to make our way to Fantasyland, and I made it a point to stop at each Photopass photographer we saw! The wait times for the pictures were never crazy - but I definitely asked for as many magic shots as possible.
5.While we were in Fantasyland, we were on the hunt to find more characters. We stumbled upon the lines for Queen of Hearts with Tweedle Dee/ Dum...and the line for Mad Hatter & Alice. I got out of one line because the other line "was going faster" and the characters left to go do their rotation. (While I was in line, the boys and adults rode the tea cups, and hit 2 trick or treat spots.)
I ended up having to get out of the line again in order to catch the fireworks show. This was FRUSTRATING and left me so hacked off - - I gave up because I knew the boys could care less about these characters.
6. We caught the fireworks show which was the middle of the night. There is only 1 showing of the fireworks show. My boys are still scared of fireworks, so we made it a point to walk all the way back to the front of the castle. A cast member let me know that the further behind the castle you are, the louder the fireworks are....
7. We headed back to Fantasyland - caught a glimpse of Minnie, Daisy, and Donald dressed in their Halloween costumes, but the lines were too long in order for us to catch the parade. So we did a quick run through trick or treat spots, checked out the exclusive MNSSHP gear for sale, and headed towards Liberty Square. On our way, the boys and I stopped for a non-Halloween photopass: the lantern shot by the Tangled bathrooms! (Matt & Hannah were riding Thunder Mountain while we did this!)
8. Once we were at Liberty Square we found a great spot to watch the parade! My boys had a front row view. The only thing I regret: not getting their sooner. We missed the start of it, which was the headless horseman. Otherwise, it was a great showcase of all the villains!
9. We raced to Main Street to try & locate Jack Skellington - we finally found him...
10. We headed to the front (by now it was 12:30pm), and caught the final photopass photographer for one last shot What I would do differently:
1. I would have caught the 2nd showing of the stage show. The boys were not interested in it, so they could have slept through
2. I would have prioritized CHARACTERS. My boys got one signature: Lotso. Although they saw Jack Skellington & Sally, they were not giving autographs
3. I would have stopped right away to get the popcorn my 5 year old requested - - as stupid & silly as that sounds, this event was for them & I felt terrible that they sold out.
4. I would have started in the back of the park & moved forward


What I wish Disney would do differently:
1. List what characters are in each area of the park!!!! PLEASE!!!!
2. Have enough merchandise for each event - why did stuff sell out so fast!?! Even the passholder merchandise was gone!
3. Offer a half off ticket price for the event for passholders, not just $10
4. We had a terrible encounter at the Jack Skellington stop. It was 11:38pm and I RAN to get into line as soon as I saw it. I was greeted by a cast member who abruptly told me the line was closed. I had to turn and tell Beau, that the one character he was wanting to see we were too late for, and he of course started crying. The cast member would not make any exceptions. This kind of stuff needs to be posted or something. Luckily, there are still amazing people in the world - a twenty something gal and her friends her me pleading with the cast member, and they offered up their spot in line for us!!! The boys got to meet Jack & Sally - but no autographs :) <- - - all that to say, this needs to be made clear. The party ends at midnight, I get that - but then PLEASE clearly lay out where the characters are so as to avoid this!


All in all, it was a fun event. The boys had fun, the adults had fun, and it really did feel like an exclusive event. Logistically, with this being our first, I really had nothing to go off of except for the map provided at the entrance, which I've linked to HERE and what fellow bloggers have offered up for tips. Hopefully I'll do better next year ;)

I did a detailed Instagram post for all the various magic shots we did that night & their locations...

Some of our favorite shots from Mickeys Not So Scary Halloween party 👻🎃🦇 I’m sharing where we took these because I wish I had known exact locations to better plan the evening. The headless horseman and the poison 🍎 were top 2 on our list and we did not find the horseman shot til we were on our way out. 👻👻👻👻 1. Headless horseman 👉 at the front entrance in front of the train depot (Beau was asleep) 2. Dancing ghosts 👉 Main Street in front of the castle 3. Poison apple and cauldron 👉 trick or treat bag start area (this is also the area that you get the TEAL bags for food allergies 🙌) I should have directed Brooks and #nosocialmediamatt to look at her hand versus what the photographer said to do, which was to look at the ground 🙄 4. Ghost background 👉 walking towards Frontierland (Brooks was asleep) 🦇🦇🦇🦇 Ask cast members, they are always so willing to help! . . . #lifeofbeau #misterbrooks #mnsshp #wdw #photopass #wdwphotopass #disneyfamily #funkybunch #halloween
A post shared by nicole brinson (@fashionablyniki) on Oct 7, 2017 at 9:06am PDT

Would I attend again? YES.

Posted by FashionablyFit on Tuesday, October 10, 2017 No comments:

SweetWorks candy company sent me a box of Halloween / Fall treats to sample eat decorate with, and I wanted to share with you! I mean seriously, I'm 38 weeks pregnant....is this not every pregnant girl's dream? Come home to a BOX of candy on your doorstep. I think so. Gestational diabetes, what???

Here's a little about SweetWorks that is taken from their website.... 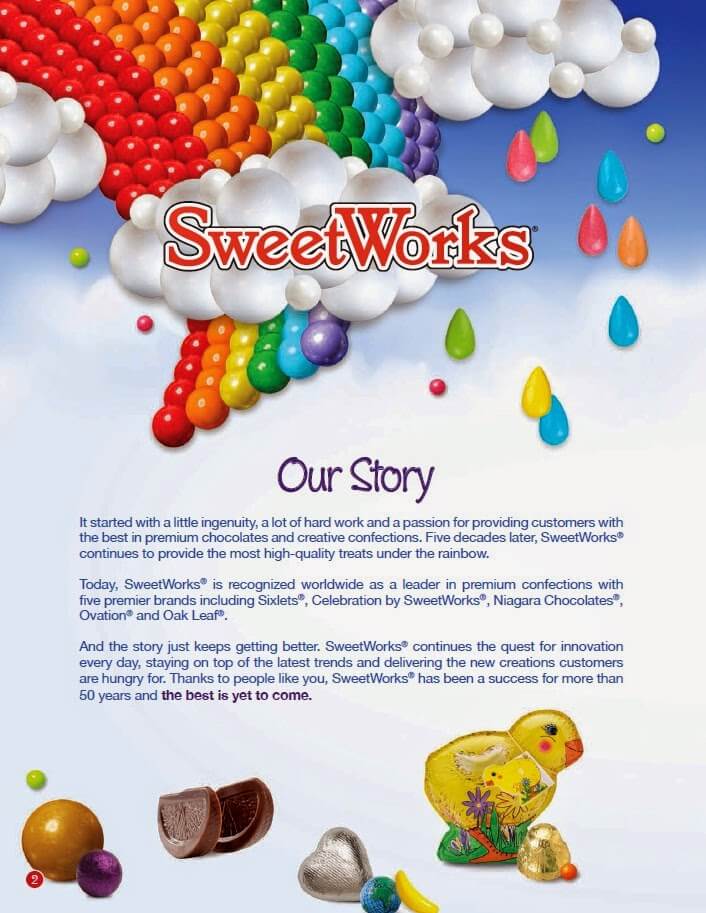 I recruited the help of my mom - - who happens to have an unspoken love affair with Sixlets, that I knew nothing of. Seriously....had to watch her like a hawk.

I knew I wanted to do a candy bar of some sort, especially with the variety of candy that they sent! Speaking of, be sure to scroll through this entire post because they are giving away candy to TEN lucky winners!!!

Here was the final product of our candy bar! It starts at my front door, and then continues on to the dining room table. I LOVE using not traditional centerpieces on my dining room table. And I especially love that the candy is fall AND Halloween themed. 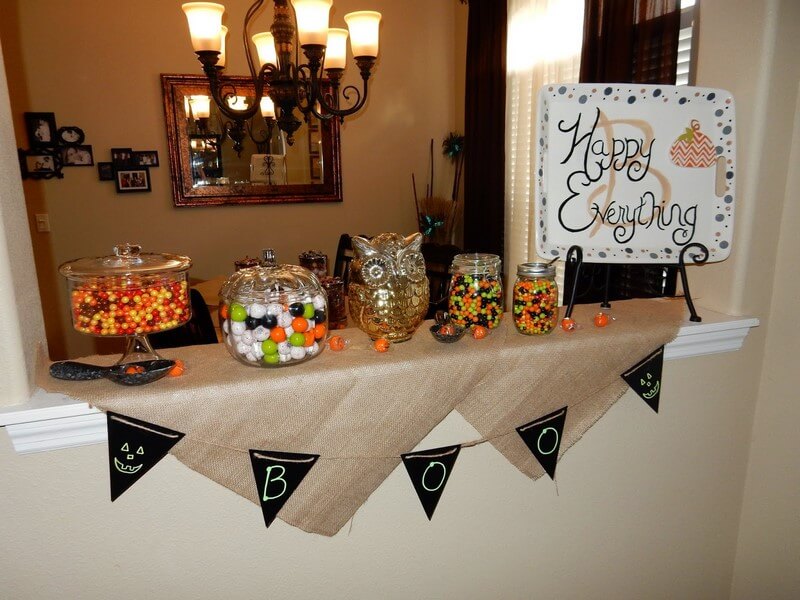 I change out the decor by my entry way for each holiday / season. So I thought it would be precious to do a candy bar since it's Halloween. 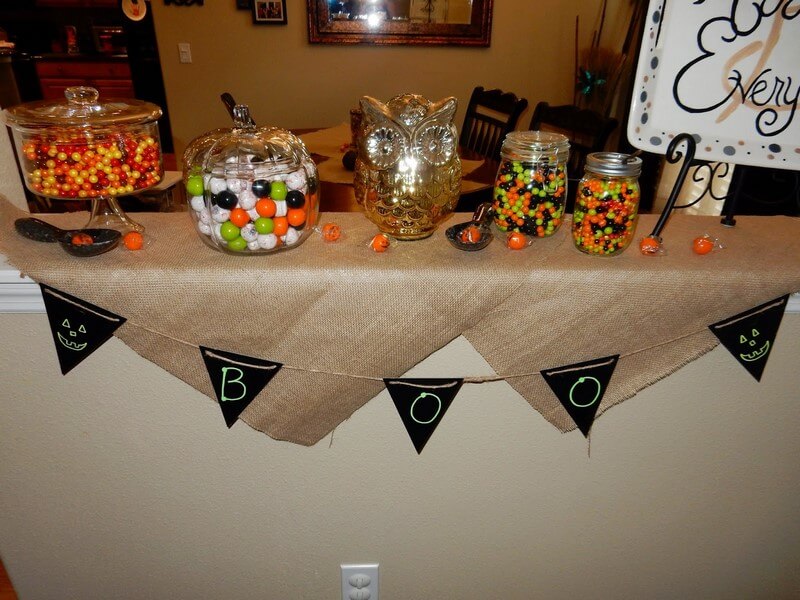 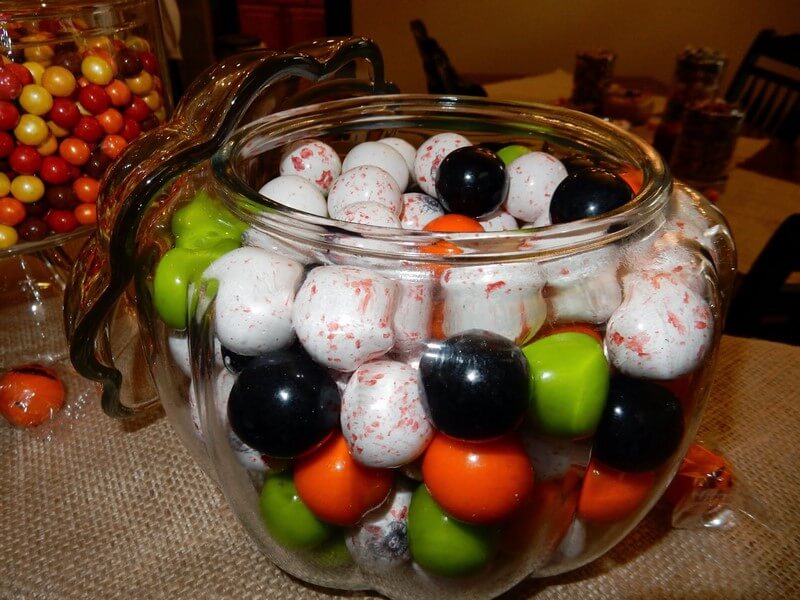 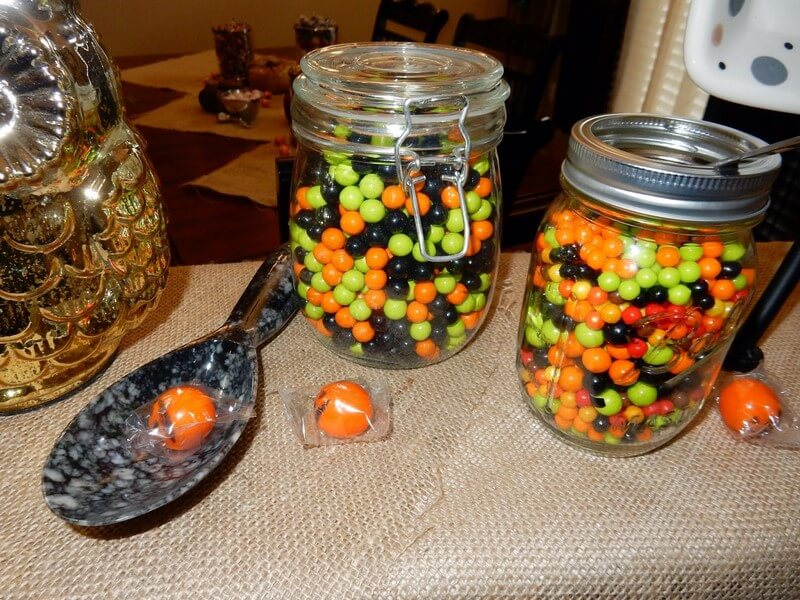 I also change out the centerpieces on my dining room table, so I carried the theme over to there as well! 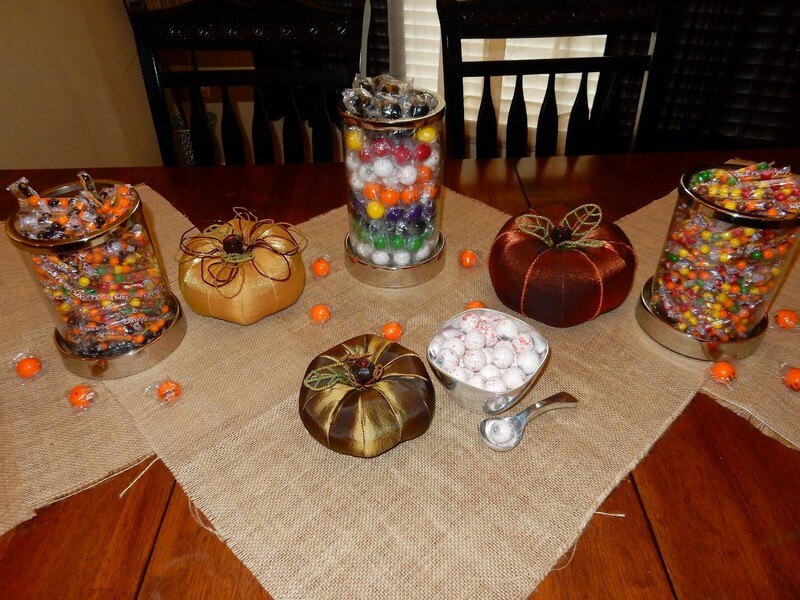 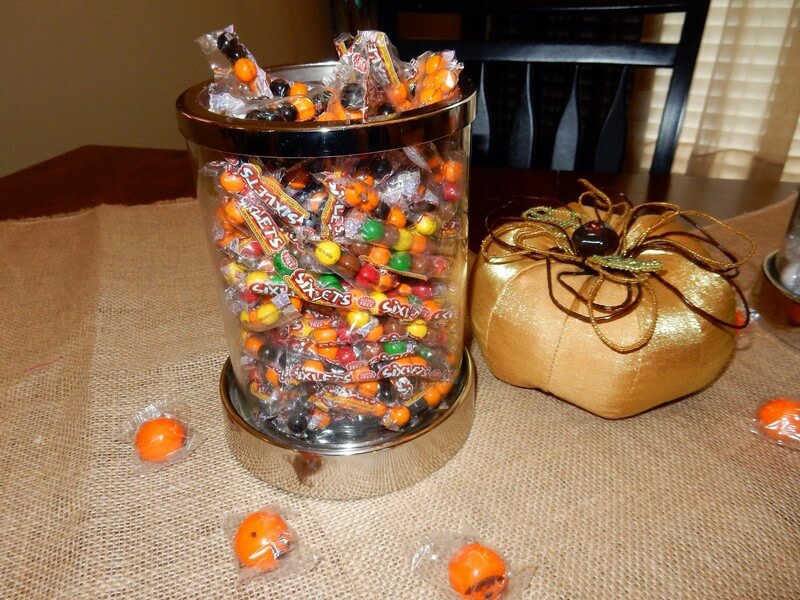 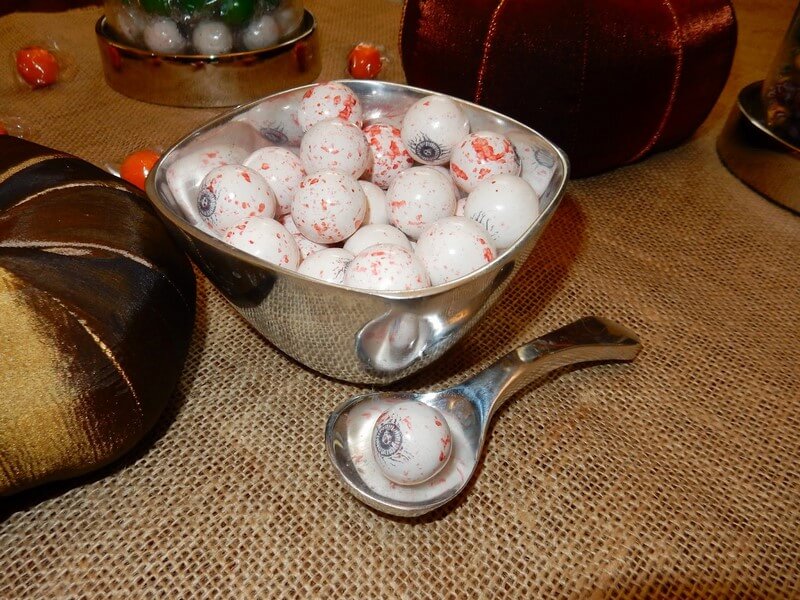 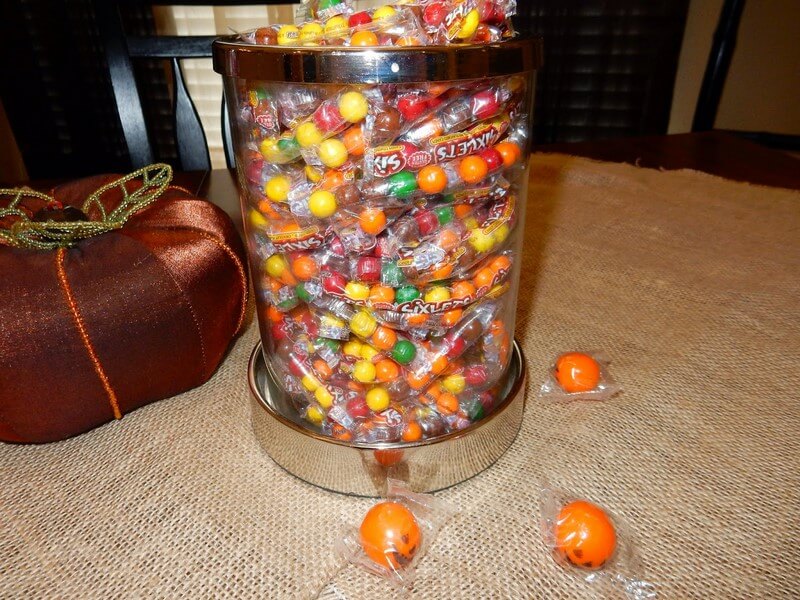 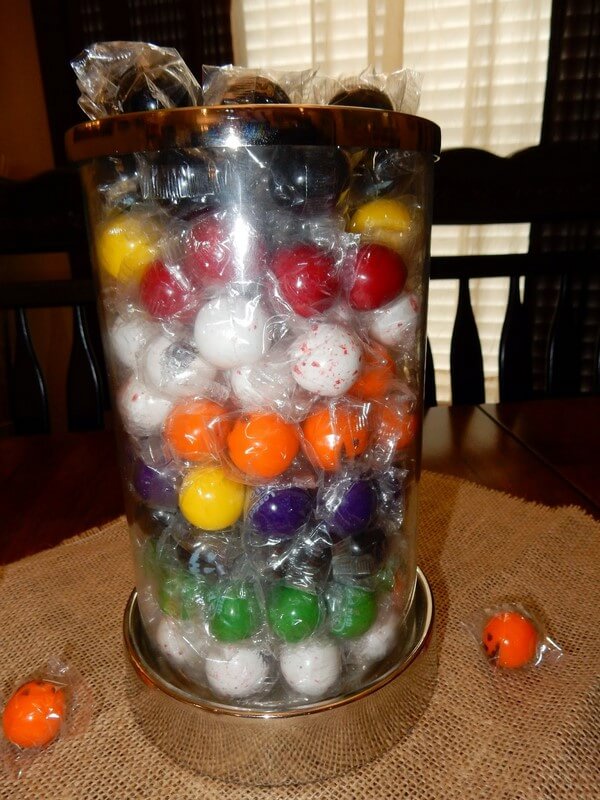 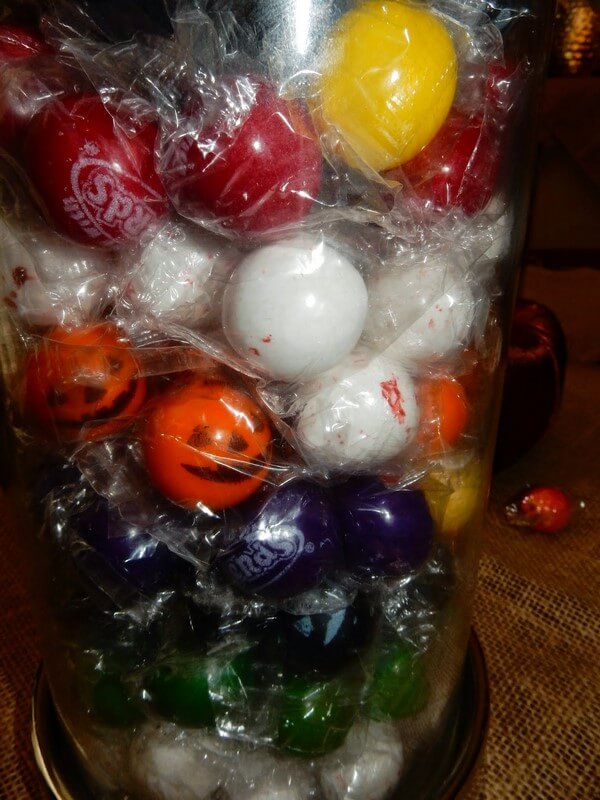 Aren't the jack-o-lantern gumballs, so cute!?!? I left some of the orange ones out, just randomly laying around the candy jars. 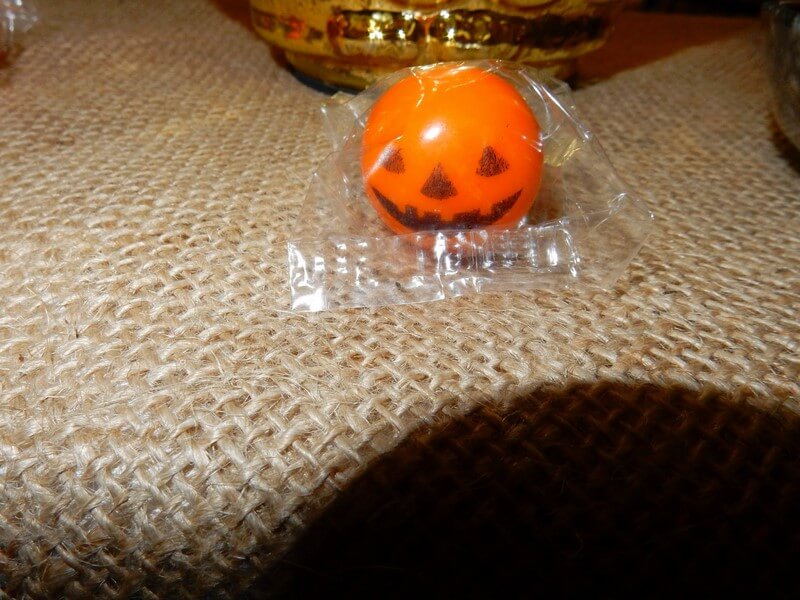 So now it's YOUR turn to win some candy stash!!! 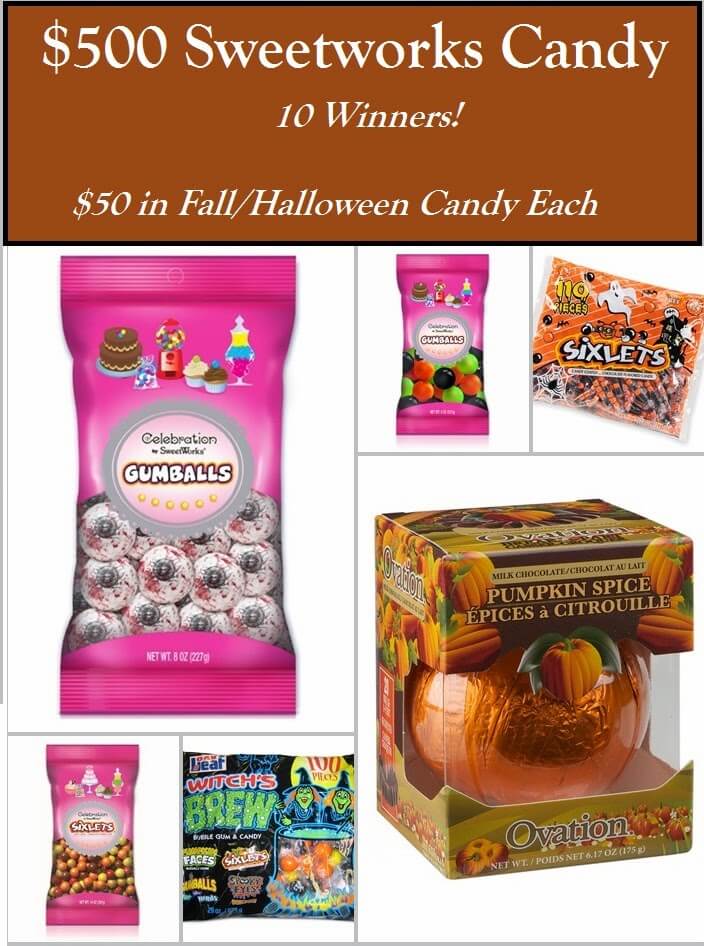 An InLinkz Link-up
Posted by FashionablyFit on Wednesday, October 01, 2014 26 comments: