If you haven't done a Disney race, you should definitely add one to your bucket list!
Posted by FashionablyFit on Thursday, May 25, 2017 3 comments:

My friend Shannon asked me awhile back to participate in a Stroller Roll 5K with her. At first I was like "UGH", because it was one of the Gasparilla races. I swore off ALL Gasparilla races a few years back.
Why?
Crowded does not even begin to describe how these races are. There are SOOOO many people. Plus the street that the race is on, is not conducive for stable running. I've been known to trip several times...

Regardless, what sold me on the race was that it:
A. explicitly said that this was NOT a race, and that anyone caught racing with their strolling would be tossed out. (in so many words)
B. not only does the adult pushing the stroller get a medal, but the baby does too!

So BB and I participated with Shannon & her precious peanut. 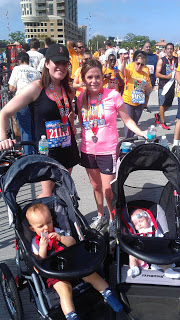 Our time from our last 5K together, DOUBLED. Ha!

We encountered numerous pit stops to tie my shoes :) but also a pretty lengthy pit stop to soothe, hold, and then change a poopy diaper. Talk about obstacle course!

By the end of it, we CLEARLY deserved the medals.

I write all this to say. The beast in me has been awakened. I want more medals. Which means I have to participate in more races.

Half marathon training is back on.

YIKES!
Posted by FashionablyFit on Wednesday, March 06, 2013 No comments:

Email ThisBlogThis!Share to TwitterShare to FacebookShare to Pinterest
Labels: 5k, being a mom, gasparilla, half marathon training, stroller roll

Matty & I left the house this morning at 4:30am, to meet my fellow IronGirls, Shannon & Nickie, in order to carpool over to Clearwater. We arrived at dark o'thirty, scored an AH-MAZING parking spot right by the expo area, and then got geared up in the parking lot. Ding dong over here, your's truly, popped her zip tie that I was supposed to use to attach my chip to my shoe. So for the next 20 minutes we were on a hunt to find IronGirl personnel. Luckily we hit the jackpot & found a nice gal that gave me 2! Score! I used both. 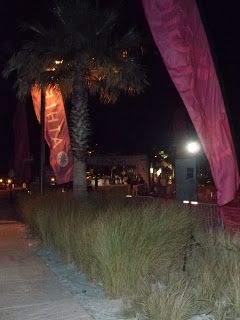 And then we stood in line for 40 minutes in order to use the potty. WOW.

Matty & Shannon's hubby, Dave decided to be spectators today...which totally scored them brownie points. So I was able to get a pre-race photo with my hubs... 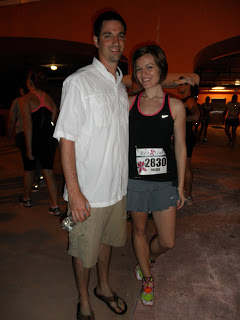 and then us girls... 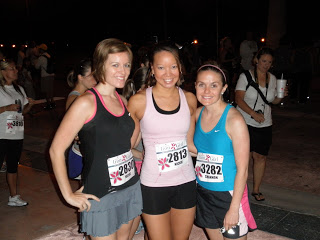 So I'm pretty sure that popping a zip tie prior to a race start, is a bad omen. Kinda like breaking a shoelace. This race was just horrible for me.

I had already decided that the 3 of us needed to be as close to the front as possible, to avoid having to dodge the walkers. We were super close...and at first I was worried we were too close & would end up pacing the 6 minute milers. Once the race started though, I realized we were fine in our placement...but there were STILL WALKERS that we had to dodge! That's where I exerted a ton of energy, speeding up, slowing down, and weaving in & out. There were no designated corrals for the 5K (at least that I saw)...so I'm thinking that maybe if there were, this whole problem could have been avoided?

Either way, by mile 2, my bladder decided it needed to potty again. So I ended up walking (bleh), with intermittent sprinting the entire mile. By mile 3, I seriously thought I was going to wet my britches. I was so bummed when I crossed the finish line. My goal was to beat my ESPN 5K time & I ended up finishing in 29:30, womp womp.

I'm super proud of them...Shannon was 26:43 and Nickie finished at 31:54. Nickie completed the Gasparilla 8K back in February, and didn't feel like she could do better than a 12 minute mile ~ she totally blew it out of the water today. Congrats girls!!!

We took a final race picture with our medals... 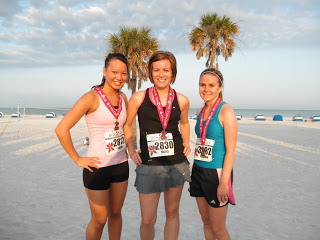 & my pastey white self stared longingly at the beach... 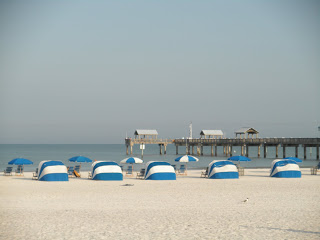 while the guys reminded us that it was time to LEAVE and get BREAKFAST!
So we made a quick dash through the expo area... 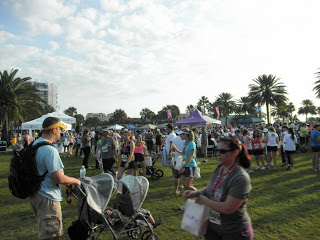 ﻿
and then ignored all the traffic rules in order to go PIG OUT at a random restaurant we found... 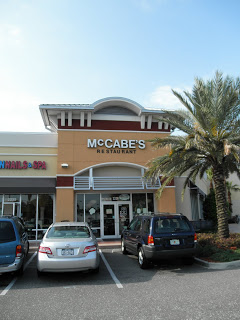 it definitely hit the post-race munchies spot...and I MOST DEFINITELY consumed more calories than I expended.
Posted by FashionablyFit on Sunday, April 10, 2011 5 comments: