a GIVEAWAY and the look book for the Fall Fashionista event!


Welcome to the Fall Fashionista Events Lookbook  and Lookbook Giveaway! In this Lookbook, you will get a SNEAK PEEK at all the prizes that are being sponsored by all 108 blogs for this year’s Fashionista Event, hosted by Still Blonde after all these Years and Modly Chic. Event is co-hosted by K Squared Glamour.  OH WOW!  Can you hardly wait to see all the great prizes in this year’s event?

Ju-Ju-Be is our Lookbook sponsor for the Fall Fashionista Events Giveaway 2013!  They have provided us with three of their darling bags. The winner of each bag will be able to choose their colors.   Up for grabs is the  PackABe , the  BeFabulous in Earth Leather, and the BetterBe.  Let’s take a look at these beautiful bags that can be used as everyday totes or high end diaper/parent bags. Watch this video as Susan, the owner of Ju-Ju-Be Bags describes these amazing bags with a presentation of the BetterBe

Just a few amazing features of a Ju-Ju-Be Bag


Now, for the Fall Fashionista Lookbook


The Fall Fashionista Lookbook features many of the sponsors for the Main Event and for individual blogs.  Our Main Event Prizes total $1000. Coupons.com is sponsoring $300 of our Main Event Prize.  They want you to know that in addition to their amazing coupons, they also have coupon codes to use when shopping online.
More sponsors will be added everyday, so be sure to check back and make a list of your favorite products and bloggers. You will then be ready for the Fall Fashionista Events Giveaway which takes place Oct. 3-9.  Take the day off work and don’t miss this event!


An InLinkz Link-up
a Rafflecopter giveaway
Posted by FashionablyFit on Wednesday, September 25, 2013 No comments:

scarves - the essence of versatility

I have to admit: I never was a big fan of wearing a scarf as of last year. I knew of only 1 way to wear it & it was only suitable for the fall / winter in my mind. Not a year round piece.

Yes - I must live in the back woods of Florida, or under a rock. What was I thinking?!?! 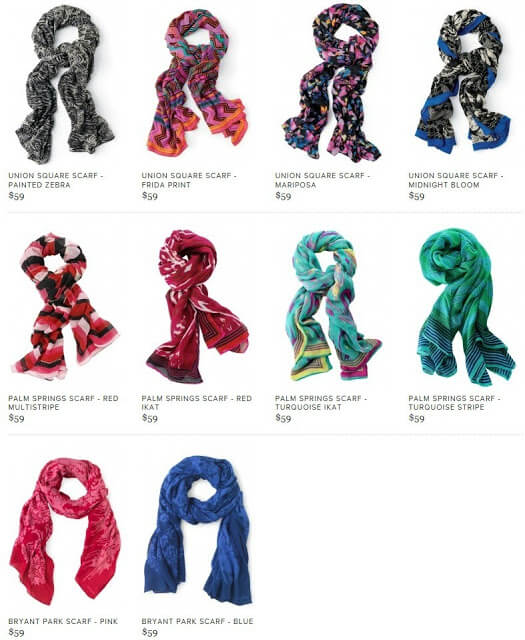 While there are tons of ways to wear a scarf the traditional way, here's a quick video of 10 ways....

Let's discuss some "out of the box ways"! 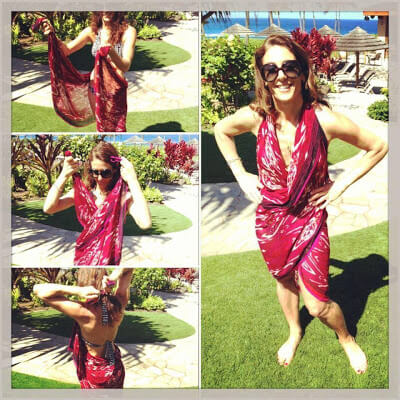 (this is our adorable CEO, Jessica Herrin - google her)
Did you catch how easy that was to wear it as a sarong!?
Way #2: a dress / vest 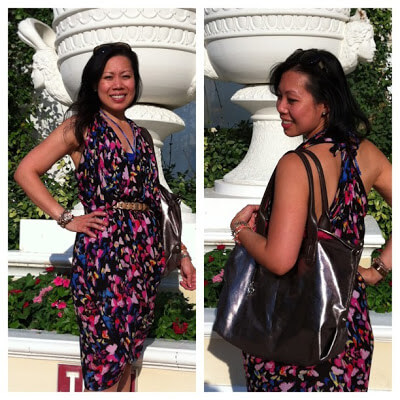 So all you really do here is add the belt to make it a dress.
Omit the belt, and the front opens like a vest :)
(Picture taken from Stella & Dot's instagram feed of style! Just include #stelladotstyle and your picture may be chosen!)
Way #3: a skirt 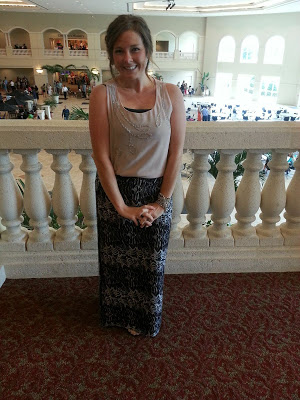 Leave it to my interior designing guru friend, Emily to make it a skirt!
Here's a close up: 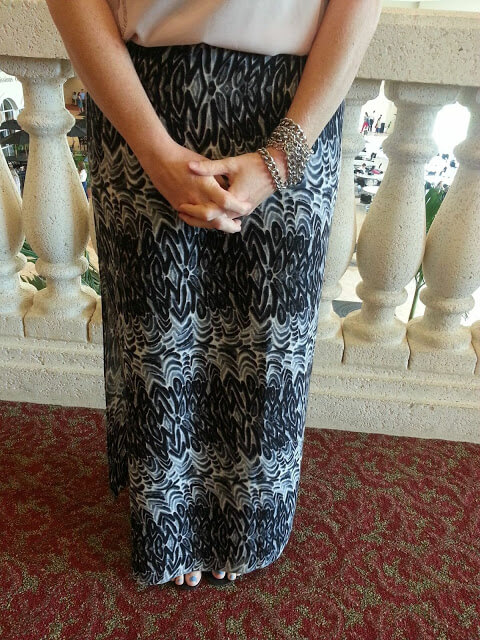 Brilliant!!!!
I love how it has a bohemian vibe to it.
That is only 3 'out of the box' ways to wear our scarves. The possibilities really are endless.
I'll be doing another post this week on options for how to wear as a TOP!!!!!
Here are some important facts:
For $59 you get a garment that will literally take you from spring to summer to winter to fall.
That's one amazing piece to add to your wardrobe, in my opinion.
Which pattern is your favorite!?
How do you feel about scarves? Love them or leave them?﻿
﻿
﻿

Posted by FashionablyFit on Monday, August 26, 2013 No comments:

MattyB and I had to take a trip to Long Beach, CA for a business convention this past weekend. We left the humid southeast Friday night & arrived in 2 hours later to LAX :)

So here is a wonderful synopsis of our trip as told by Instagram & pictures on my phone.

If you ever make it to Tampa, FL....you must pay a visit to The Columbia. It's a historical landmark & it has some awesome food. It was a pleasant surprise to find that our airport now has a mini version!

So I ate these sinful creations called 'black bean cakes'. Literally like a deviled crab, but without the crab & with black beans. They were served with sour cream AND guacomole. It took every bone in my body to NOT spoon the remainder of the guacomole into my mouth.

Boarded our plane at 7pm EST, landed in California at 9:15pmPST.

Hopped off the plane at LAX with a dream & no cardigan.
It was chilly.

After a horrendous time at LAX, we finally made it to our hotel. I'm not gonna lie, part of the "horrendous" visit comes from the fact that it was a total buzz kill. I had built up this grand idea in my head that I would have some celebrity sightings & that TMZ would stop us on the way to our car.

So anyways, the car took us to our hotel & we hit the hay. Flights from the east coast to west coast & vice versa are so draining.

We had to get up early the next morning to tend to business. Once that nonsense was done, we meandered about the area. 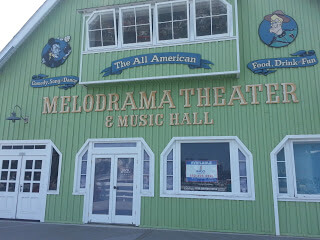 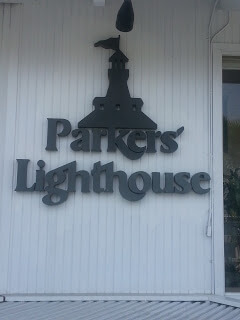 Looked for lunch around 10am PST because we were still on EST.
Ended up at the movies to see The Hangover 3 (a matinee....holy cow).


Once we had our fill of touristy shenanigans, we ventured back to the hotel. I indulged in a fabulous Frap & some people watching.


We had business to do that night, so off to the races it was. 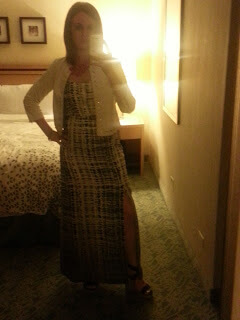 Followed by an overpriced dinner at a restaurant in the marina area.

The next day was more business. By this point my feet were KILLING me.


I love my wedges, and rarely have the chance of wearing them. So duh, a weekend away with the hubby, no baby - I was pulling out all the stops.

Pssshhhhhh! My feet were not having it.

We finished out our day with a yummy meal at Yen Sushi on 2nd Street. Delish!

Our last day - I bugged Sarah to meet up with me for coffee. It was such a refreshing break from work. She's as down to earth in person as she is on her blog.

After coffee it was back to the convention for the last time! I sported flats rather than the wedges. Finally wised up a bit.

Once our business portion of the trip was finally done, we had a few hours to waste. So we ate at the Rock Bottom Brewery across from our hotel. Granted it was 4pm PST, so we arrived in perfect time for their happy hour. I have zero interest in beer, but appetizers I'm ALL about - - -> and they were YUM!

After engorging ourselves we walked again & ended up at this $1 Book Store.....literally everything is $1. I'm too much of an impulsive buyer and felt like I HAD to buy SOMETHING. Seriously, it was a BUCK!

However it was such a stressful situation because nothing was organized. It was like rows of books that were sometimes in alphabetical order by author, but many times just stacked one in front of the other. Rummaging is not my forte.

Needless to say, I grabbed a sub par book by a familiar author.

By this point we scurried back to the hotel to wait for the car.


The hotel had the cutest little lounge area. It was decorated like a boutique hotel. Crystal lamps, zebra print chairs, very modern furniture, and eclectic accents. This was my favorite spot to people watch.

It was time to leave - so back to LAX.

Stella & Dot bag: How Does She Do It in Metallic Ikat

After 4 hours of waiting at LAX we boarded the plane & headed home. Left the west coast at 10:40pm PST and arrived in at 6am EST.

Landed in the good ole Trampa, loaded up, hit Starbucks, stopped in to the office, and then picked up this cute little nugget!

Posted by FashionablyFit on Wednesday, June 05, 2013 No comments: