What was your favorite Saturday morning cartoon?

Mine was none other than... 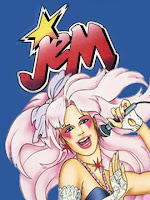 Gone are the days are of lazy morning Saturdays, watching cartoons & then Saved By the Bell.

I could sleep in on Saturdays if: I wasn't training for a half, if Dexter would let me, and if I didn't eat a lot the night before.

Last night we met up with our good friends Emily & Casey for some dinner at Ballyhoo's! 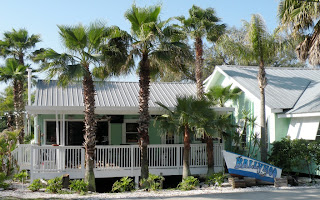 We started off with a mile high pile of nachos - delish!! And then I ordered their seared tuna salad - which they might as well have just brought me a plate of spinach, tuna, and wonton strips. By the end of the meal I was just picking off the wonton strips garnish to eat. Leaving behind the carrots & water chestnuts.

Since we were right by a mall, we swung by there so I could pick up a baby shower gift, left a car there, and carpooled to get some froyo!!!!

I had gone in to the evening with the expectation of getting froyo...mainly because I had never had it & the part of town where Matt "the Situation" & I live has diddly squat.

I was really excited when Emily found this place:


After sampling only 3 of the flavors they offered...I decided to do a "trifecta". I went with all 3 flavors: red velvet cupcake, sweet vanilla, and kahlua.
Good thing I didn't try all the flavors they offer.
Then I got to choose my toppings...so in went white chocolate morsels, gummy bears, sour gummy worms, 2 cherries (yes, only 2), and some granola (ya know, to make it healthy).
Ta da! 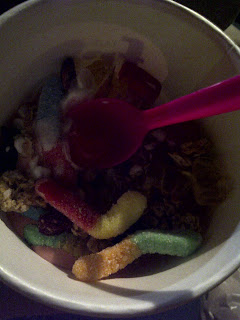 And then it had to be weighed.
womp, womp. 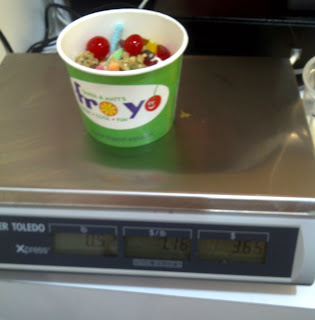 I tried to stay conservative with the toppings since it had to be weighed. I didn't want Matty having a 'situation' at the counter & exploding about the weight of my froyo.

That just wouldn't be nice. 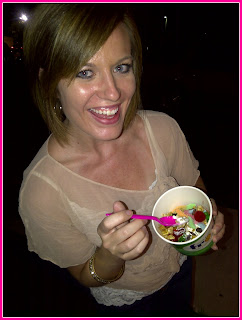 Since FroYo was having a 2 person concert inside we opted to eat in the car. Hotel California & Killing Me Softly just shouldn't be sung unless you're at a Chinese restaurant that has karoake, in Italy. (Am I the only one that's done that?)

Needless to say, when the lady was singing Killing Me Softly we got our Fugees on & said "one time" & "two time" when needed.

Yes we can be obnoxious.

Some shots of us getting our froyo on in da Honda: 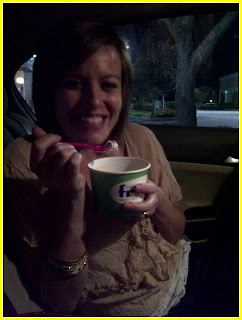 Since we had left our car at the mall, Emily & Casey drove us to pick it up...and naturally Matt had a "situation" and found a stroller / cart / buggy thing.

What a fun night! I always have to watch my froyo weight since it's so pricey...but I usually fail!
:)

LOL on the carts! I always kinda want to do that (but I don't think I'd be a very good role model for my kids).

Did you know they have Jem on the Hub channel? Have I mentioned it's my new favorite channel? I love flashing back. I think my favorite cartoon was Rainbow Brite!

I love the new look of your blog!!! Fabulous. Also, I love froyo and I feel a blogger meet-up is underway. I would love to know your thoughts on Physique 57. I have been wanting to try it..... and, I EAT LIKE A MAN when I train as well. I am trying to lose my jiggly legs, but I think I will forever have volleyball player thighs. You are lovely and I hope you have a good afternoon.

What just caught my eye was the Jem icon. Can i tell you that it comes on every day on the hub channel. EVERYDAY. I'm totally serious....and you are truly outrageous.
bahahahaha