I was a narnar on Friday & left my camera cord at work. So, plan to see a part 2 of this post.

Saturday was the endurance run for my training plan. 7 miles was the target. I ended up running a little over 8 miles.

Dexter was a super sideline cheerleader for me & slept the ENTIRE time. 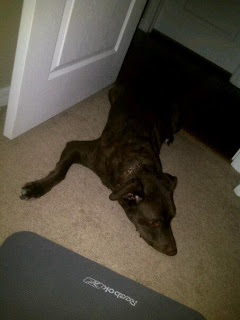 
My hip flexor area is still bothering me - so the pain was sporadically slowing me down. Plus, I've got a lot of junk in the trunk & I'm just not fast with the load.

According to Nike+ my average minutes per mile was 11:33 & I finished in 90 minutes. (That does include all my water & potty breaks though - I let the timer run & didn't pause).

After my run, I decided to take Dexter out for a short walk. I'm not sure how this happened, but I got lost in our neighborhood.
Yes, I was dropped on my head as a baby.

So once I finally navigated in the right direction, that's when I noticed Dexter was struggling a little bit. He then decided he had had enough, & just laid down in someone's lawn. I finally coaxed him to get up, but I was really thinking that I should probably carry him back home.

We got back to the house & he collapsed on the cool floor. 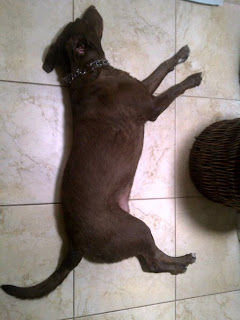 It was super hot out & all, but for a hyper dog, he's super out of shape. Matt thinks he's just designed for short bursts of energy, not sustained activities. It was a 2 mile walk, so I really thought he'd do just fine. I will say it SO helped his temperment the rest of the day.

We attended a wedding Saturday afternoon....& I finally got the chance to wear this dress: 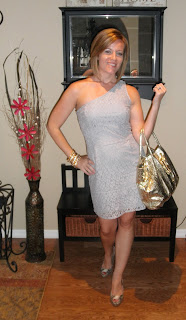 Posted by FashionablyFit on Monday, August 22, 2011