NKOTB & BSB were on the results show for Dancing With the Stars last night. I really impressed Mattpew with my ability to remember all the words to the songs they sang last night (I Want It That Way & Step By Step).

I thought it was perfect to have the boy bands on there...as well as Hanson... since the theme was guilty pleasures.

Who wants to go to the NKOTBSB concert with me? 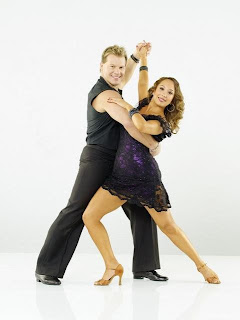 Chris & Cheryl were voted off...
they fought a good fight.
And in other news: YAHOO had another interesting headline that I had to read..."New Eating Disorders: Are They For Real?"
To sum it up - -> picky eating in adults is now called Adult Selective Eating; and "an obsession with healthy eating" (from article, not my words) is termed Orthorexia.
More on Adult Selective Eating from the article:

...researchers don’t know if adult picky eaters just haven’t outgrown childhood patterns or if their eating habits are a new twist on obsessive compulsive disorder. Some may be “supertasters,” with an abnormally acute sense of taste that turns them off certain foods. Many appear to have had unpleasant childhood associations with food.

...the focus isn’t on losing weight. Instead, sufferers increasingly restrict their diets to foods they consider pure, natural and healthful. Some researchers say that orthorexia may combine a touch of obsessive compulsive disorder with anxiety and warn that severely limited “healthy” diets may be a stepping stone to anorexia nervosa, the most severe - and potentially life-threatening - eating disorder.

If you read the article, comment & tell me your thoughts on it...I'm interested to read other opinions. It's worth reading the article if you're interested. It's a fairly quick read. More on Orthorexia from the article:
Posted by FashionablyFit on Wednesday, April 27, 2011

Email ThisBlogThis!Share to TwitterShare to FacebookShare to Pinterest
Labels: article, dancing with the stars, eating disorders

Very interesting article! I think they do have a point in a couple of places - such as people who are extremely picky eaters (allergies, etc. aside) do make it hard on themselves.

And while I do think it's very possible to be overly obsessed with "healthy" eating, I don't think too many people are really in danger of that. Balance would seem to be a key!

I don't agree at all with the segment that said, "Kristie Rutzel, 27, dropped to 68 pounds when she was in the grip of her fixation on healthy eating - at one point she ate little more than raw broccoli and cauliflower." To me, that is *not* healthy eating. She might have been eating foods that were technically healthy and good for you, but if you drop to 68lbs, obviously she was extremely deprived. If those two things are all you eat, your body isn't getting what it needs - "Healthy eating", to me, is where you try to have a reasonably healthy diet, full of fruits\veggies\nutrients and vitamins to help your body, and doesn't make you become emaciated if you stick to it.

I think that a lot of eating disorders are disguised as "healthy eating", as in "Well, I am only eating vegan/fat free/organic, so even though it is only 900 calories a day, I am eating HEALTHY and therefor this is not an eating disorder".

But, as with everything, balance is key!

Interesting article...
I do know people who eliminate groups of food one by one (meat, dairy, sugar, etc.) to limit what they CAN eat (and therefore calories). But there are of course lots of very healthy people who are vegan and or/sugar-free too!
All about balance in my book...
:)

I work with, and try to advise, people who have such picky eating preferences. Some of them, not all, I would place in an OCD category because they also seen to have a tendency to be a hypochondriac.... not sure how I feel about orthorexia... if one was really focusing on health, they would be eating enough. Maybe there is a new categoey of people that struggle with anorexia. Interesting post girl.