are you what you eat?

Let me preface this post by saying: I'm not a registered dietitian or a nutritionist, by any means...I'm just really interested in the following subject matter.

With that said...do you eat organic?

Organic foods are those that are produced using methods that do not involve modern synthetic inputs such as pesticides and chemical fertilizers, do not contain genetically modified organisms, and are not processed using irradiation, industrial solvents, or chemical food additives
(Thanks Wikipedia)

Personally, I go halfsies when it comes to organic versus non-organic. Here are my thoughts on the subject:
Back to the whole grass fed & cage free thing...I just like the comfort of knowing what the meat I'm eating was fed & how they lived. Granted with the meat, I don't know how they were raised when I purchase it in the grocery store. 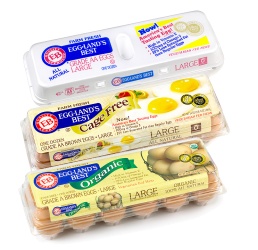 Actually I'm not "allowed" to buy meat anymore for us. Matt took away the privilege when I came home from the store with organic chicken that was triple what we pay for regular boneless, skinless chicken breasts. Oops.
I know this has been a random post ~ but I'm really curious to see how others think & feel on the subject matter. Last night we watched Jamie Oliver's Food Revolution & it really had me thinking. Do you know where your meat is coming from, or better yet, if it's real meat!? 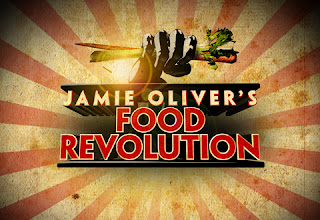 Jamie showed how processing companies take the remains of unusable cow meat (he called it the "pink slime") and centrifuge it into what appears to be normal ground beef. Oh it's mixed with ammonia & water in order to kill any bacteria...nice, huh?
His intent was to educate parents on what their children are eating at school, when they eat the school's breakfast or lunch. He travels across the US trying to "revamp" school food. With childhood obesity being so high, I think it's a great idea.
Not to give you a whole recap of the show, but Jamie also stopped by a non-franchised fast food restaurant, and offered the owner his help in making the menu healthier. Jamie made such changes as swapping out mayo for Greek yogurt, and using yogurt in milkshakes rather than ice cream - -> which ultimately cut down fat, calorie content, and made the meals much healthier for being fast food. Ultimately though, all that mattered to the owner was the costs. And even though a customer said that the burger tasted better Jamie's way, the customer chose the regular version only due to price. (Both were under $5).
Thoughts????
If you're interested in the topic, and want to read more on it, check out the following:
Those are just a few sources that I'm familiar with...I'm sure there are countless others that are just as good, if not better. But those were the ones that really challenged me to dig deeper & be more conscientious of what I'm putting into my body.

I'm not wanting this post to stir up any hard feelings regarding being vegan, eating meat, loving animals, or being vegetarian (which yes, is very different from being vegan). My whole intent on this post was to find out feelings on organic products, and to if anything, encourage being informed about what you eat & making smart choices.
Posted by FashionablyFit on Wednesday, April 13, 2011

THAT is why were are on the same wavelength. Jamie Oliver's show last night =) Great post girl. I agree with the "organic junk food" concept... Just a waste of money. I love Skinny B**** too... She went a little to veggie for me, but great concepts. Also, I think Food Inc. did a great job at adressing the obesity pandemic without making you feel guilty for eating meat. Clay was even interested in that one and found a grass fed beef farmer that delivers to Lutz. I will send you the info.

I just saw a documentary debunking Super Size Me called Fat Head. I didn't agree with everything in it, but it does give you something to think about!

If we are what we eat, then I'm probably a packet of Splenda. I know the stuff isn't good, but it's hard for me to want to put the time and money into eating organically.

I'm not 100% onboard with organic (my mom's boyfriend was an organic farmer - there's still shady stuff that goes on), but I do agree that local is best!

Have you read Jillian Michael's book (Mastering Your Metabolism)? She did a lot of research on chemicals/hormones and I found it so fascinating (and disturbing). I really just started getting into this whole foods, no chemical movement and I'm really glad that we are making the shift!

Sometimes I will buy organic produce if it's not outrageously prices, but that's the problem it is, so typically I won't buy it.