I have a confession...

Since it was monsooning here yesterday, I headed home after work to do a P90X workout. Yes, I'm done with the program, but apparently it's a hard habit to break. It was insanely lightning at our house, so while I wanted to hop on the treadmill I opted not to. Mainly because Matt's told me not to run on it while there's lightning ~ but I think in yesterday's case ~ he was really wanting to rush home to watch me run in hopes of the power shutting off abruptly, and me flying off.

So instead of giving Matt more things to make fun of me for ~ I spent some QT with Tony Horton, working out the shoulders & arms. I really like that workout...especially when it's just the music I hear :) I followed it up with the Ab Ripper X. By the time I was done, Matt was home & ready for dinner. ﻿
Lucky for me, Matt brought me home my current addiction yesterday: 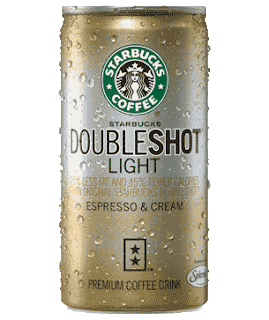 And instead of telling me "here honey, look what I got you"...he said "you have an expensive habit". Tuesday's confessional: I have a bad coffee habit.
I mix these little guys with my protein mix. Sometimes, when I've been really good not shopping online he'll get me these:

These are ah-mah-zing. It's an energy drink too. I know, I know, not the healthiest by any means ~ and I feel like such a hypocrite drinking them. It is Matt's aunt's fault though ~ she brought me a COOLER FULL of them. I couldn't let them go to waste. These double shots though, they are the bomb diggity. I can get enough for TWO protein mix drinks out of these!
﻿
I'm sure there are healthier options out there...but do they taste good? Yesterday, this giveaway was posted...which includes some CLICK coffee mixes. Regardless if I win (which the odds are not looking grand), I'm planning on giving these CLICK babies a go round. See if they can rock my socks like Starbucks does.
Do you have any products that you're absolutely addicted to?
I'm also addicted to CoverGirl's lash blast mascara. I'm lucky if a tube lasts longer than a month.
Posted by FashionablyFit on Tuesday, March 29, 2011

CHI silk infusion serum! That sucker is pricy too! However, I did manage to find it bogo at Target :) I told Clay that it helps my hair not fall out of my head.... :) oh, and fage greek yogurt with honey!! Addicted :)

Hey! I'm a new follower and Madi Anson sent me to your blog, she thought I'd really enjoy it and so far I am! : ]

I'm addicted to Nars blush. Cannot live without it. Ever.

Hi Darlin! This is Madison. I love all your fitness tips...real things I can do. Working out for 2 hours, not so much. So I will read your blog and hope that I am burning calories in the process.
I am 100% addicted to Cover Girl LashExact Waterproof mascara. I am a mascara snob now and will not use any other!